It was found that acylpolyamines have a very characteristic fragmentational behaviour in tandem mass spectrometry. The fragmentation study of synthetic acylpolyamines showed that polyamine derivatives undergo mainly intramolecular nucleophilic substitution reactions at the protonated amino groups. The fragmentational behaviour of acylpolyamines can be summarised in seven general fragment types, namely a-, b-, c- and ta-ions for fragments with the head moiety and z-, y- and tz-type ions for fragments containing the tail side. The nomenclature for these fragment ions is inspired by the nomenclature used in peptide fragmentation without meaning to imply similar structures or similar fragmentation reactions. As an example, the complete interpretation of the MS/MS spectra of the synthetic polyamine toxins 4-OH-Bz3334 and IndAcAsn3(Me)43 are shown below. A detailed description for each fragment ion type is attached below. 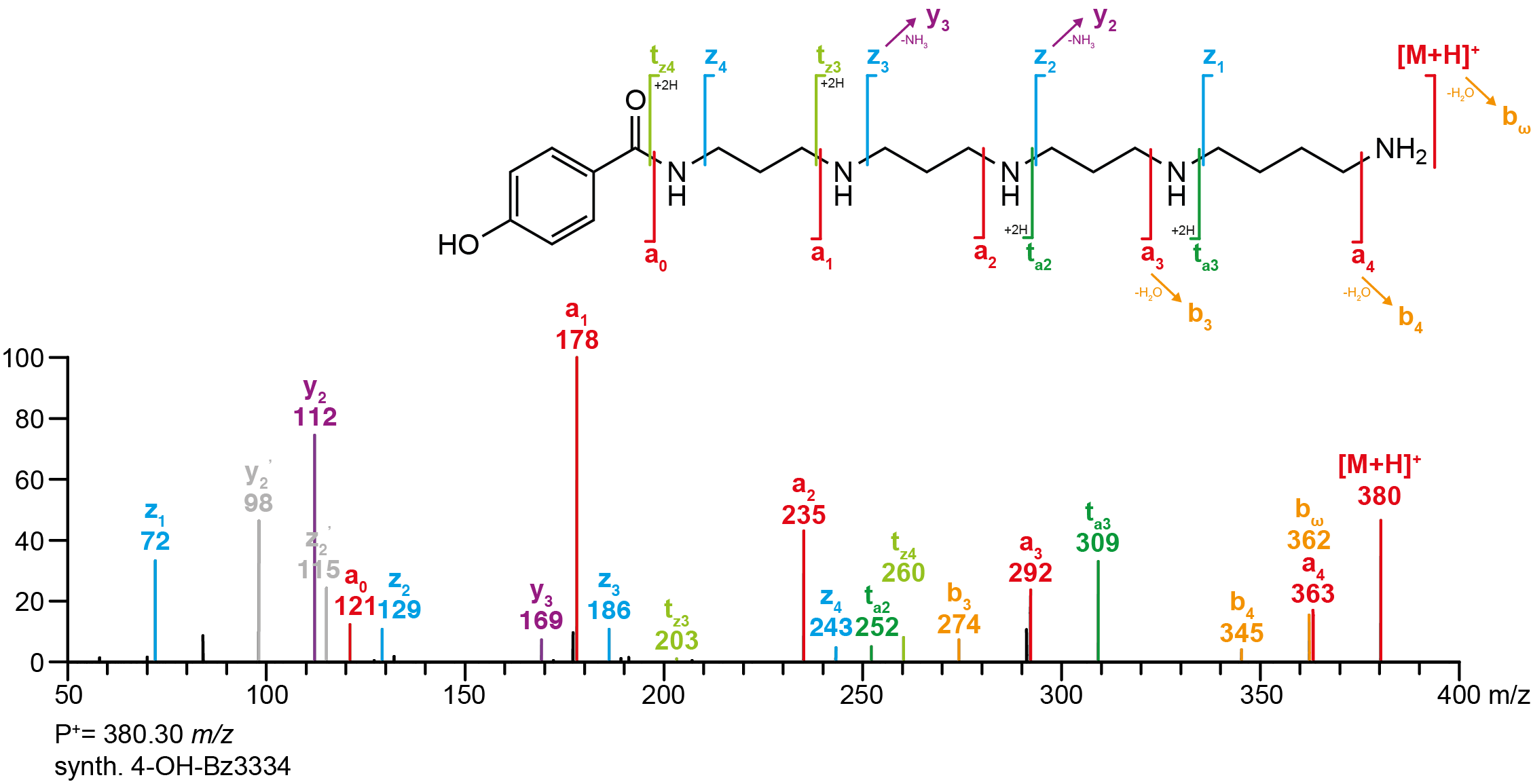 The result of an intramolecular nucleophilic substitution starting from the acetylated end of the molecule results in a cyclic ion structure and the loss of an uncharged amine.

The a-type fragment ions are, together with the overall fragmentation pattern, the most important fragment ions for the structure elucidation of unknown acylpolyamines.

The expulsion of water from an a-type ion [a-H₂O]⁺.

The expulsion of ammonia from an a-type ion [a-NH₃]⁺.

An intramolecular nucleophilic substitution starting from the tail side results in a cyclic ion (z) by the loss of an uncharged amine.

However, z-type ions can also be the result of a transaminative Zip-reaction or a stepwise fragmentation of the polyamine backbone, which are then called z’-type ions.

The expulsion of ammonia from an z-type ion [z-NH₃]⁺.

The truncated fragments are probably formed by a proton transfer via a proton bound complex. In the case of a ta fragment the proton might come from the contrary z fragment ion. For a tz fragment the proton is transferred from an an ion to the loosed uncharged amine (tail side). The tz type ion that includes the complete polyamine back chain, can usually be detected in the tandem mass spectrum of the doubly charged parent ion.